Lip Service:   an avowal of advocacy, adherence, or allegiance expressed in words but not backed by deeds. 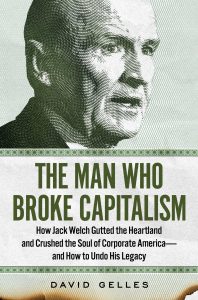 After reading, and presenting my synopsis of The Man Who Broke Capitalism:  How Jack Welch Gutted the Heartland and Crushed the Soul of Corporate America — and How to Undo His Legacy by David Gelles, there is one thing I cannot shake.

Let’s call it the pretend game.

After Jack Welch left General Electric, he tried to redefine himself.  What he said actually matters for a corporation was exactly the opposite of what he did, what he focused on, when he led GE.

Jack Welch:  “Your main constituencies are your employees, your customers and your products.” Coming from Welch, the assertion was laughable.

But just as he had reinvited himself in retirement, he was now rewriting his history as CEO, too.

He regularly took to LinkedIn, the social network for professionals, to publish essays disavowing his own managerial innovations.

Welch described his beloved Vitality Curve as a media-invented, politicized, sledgehammer of a pejorative that perpetuates a myth about a powerfully effective real practice called (more appropriately) differentiation. But he didn’t deny doing it.

Welch was engaged in a grand campaign to buff out the blemishes in his career and perpetuate the myth that he was indeed the Manager of the Century.

In other words, the man who disposed of employees like one would dispose of yesterday’s dot-matrix printers claimed, after the fact, that employees really, really mattered. It was a game of “Let’s pretend.”  It was lip service.

In other words, for too many, it is lip service; a game of let’s pretend.

In the David Gelles book, he writes of companies which have theoretically abandoned the narrowness of Milton Friedman’s stockholder profits-first dictum.  But, in reality, in practice, their claims are pretty empty; they seem to be playing the game of…lip service…let’s pretend.

This whole idea is a cousin to the “knowing-doing” gap.  But it is not quite the same.  In the knowing-doing gap, companies do not execute; they do not implement what they know.  But they are not pretending; they just have not fully developed the expertise.

No…this is different  This is “I’ll talk a good game of servant leadership, and every stakeholder matters,” while, all along, these leaders are planning ways to lay off more employees and close down divisions, and outsource and offshore work, all in the pursuit of this quarter’s better stock price.

Let’s pretend.  Lip service.  We need to find a way to identify those who are playing this game.  Because, it is a harmful game indeed.